Blogging about the Bookcase

Busy. Frightfully busy. From 3rd September my life returns, by degrees, to normality.

I had a desperate want to get Episode 2 out before going to Whitby Folk Week, but time and the North Sea tide have conspired against me. It should be up some time over the bank holiday.

I've just about finished washing off the last of the mud from The Festival at the Edge. An indomitable festival, a delightful weekend, and a big "Huzzah" to anyone else who made it through. If any of you are in Whitby come and say "Hello"!

There's some very exciting projects in the pipelines, and more details to come in this blog, in particular the Sir Gawain and the Green Knight show I'm putting together is starting to build up momentum, more on that as it happens.

Some of you might not be aware of my role in Clara73, the surreal audio play on Quirky Nomads. It's been a pretty exciting project so far and if you've not heard it already it's well worth a listen.

I'll leave with a photo* of me telling at Beyond the Border, taken by the delightful Mike O'Connor. Mike's a cracking bloke, there's something of the fae about him. I told the Selkie Lullaby that I put out in Episode 1 with the usual plea for info, and he came bounding over to tell me about the manuscripts of John McCodrum, he even played the McCodrum family Seal Call on concertina. I would have recorded it, but as Miss Shine points out it would be irresponsible of me to learn a tune for charming seals and not also collected a tune for making them go away again.

I'll see you all soon. 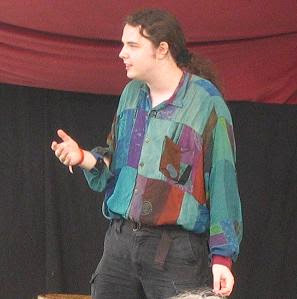 * He took a couple of action shots, and in each of them I'm pulling a silly face or in an odd pose. This is the most normal, I think.
Posted by Timothy M. Ralphs at 13:49